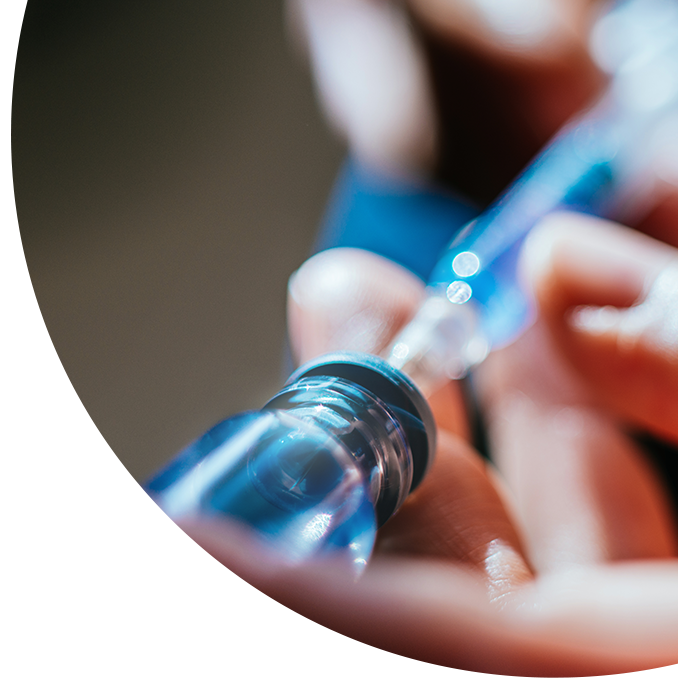 Cell Therapies involve reprogramming cells, often immune cells, that are sourced either from the patient (autologous), or from a suitable donor (allogenic). Reprogrammed cells are isolated, expanded and subsequently (re)infused back into the patient. 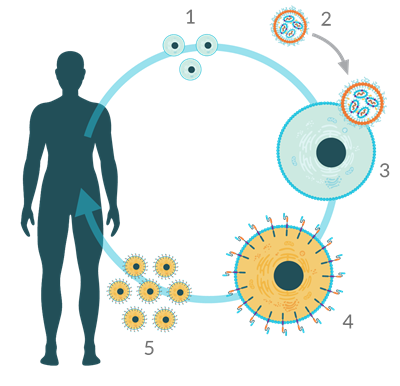 1.      T cells are isolated from the patient
2.      mRNA encoding the CAR designed to recognize biomarkers for the disease (or nearly any protein) are encapsulated into lipid nanoparticles (LNP)
3.      LNP mediate delivery of the mRNA into the T cells ex vivo
4.      T cells translate the mRNA into CAR proteins, which are presented on the cell surface
5.      Engineered CAR T Cells are expanded and given back to the patient where they mount an immune response to the target recognized by the CAR
Genetic Medicine Toolkit for Cell Therapy
Modulating gene expression and engineering cells into Cell Therapies can be enabled by non-viral gene delivery. Precision NanoSystems’ Genetic Medicine Toolkit makes the essential technologies for producing non-viral lipid-based delivery of nucleic acids broadly accessible. Unlike viral vectors, lipid nanoparticles do not require cell culture for production, thus streamlining development and manufacturing.
Cell Therapy Toolkit
Cell Therapy Technology

Precision NanoSystems has developed proprietary lipids and lipid nanoparticle (LNP) compositions for delivering RNA to various cell types. In the study below, LNP formulations were shown to successfully deliver mRNA encoding a reporter gene (GFP) to primary human T cells in vitro. This technology has been adapted to mediate expression of clinically relevant proteins in T cells, such as chimeric antigen receptors (CAR).

In Cell Therapy applications, RNA-LNP are used as reprogramming reagents and are not subject to the same regulatory requirements as a drug product. LNP are easier to produce than viral vectors, which are commonly used to reprogram cells.

B) Cell Viability is Unaffected by LNP Treatment and Expression of Transgene, Important for Achieving High Yield of Modified Cells

How to Develop Cell Therapies

Precision NanoSystems’ Framework is designed to guide development of non-viral genetic medicines, such as RNA-LNP, from idea to commercial product. In Cell Therapy, the RNA-LNP is used as a reagent and is not the drug product. Nevertheless, as shown below, aspects of the Framework can be used to guide and accelerate optimization of the RNA-LNP ex vivo reprogramming reagent, which is critical for production of the Cell Therapy product. 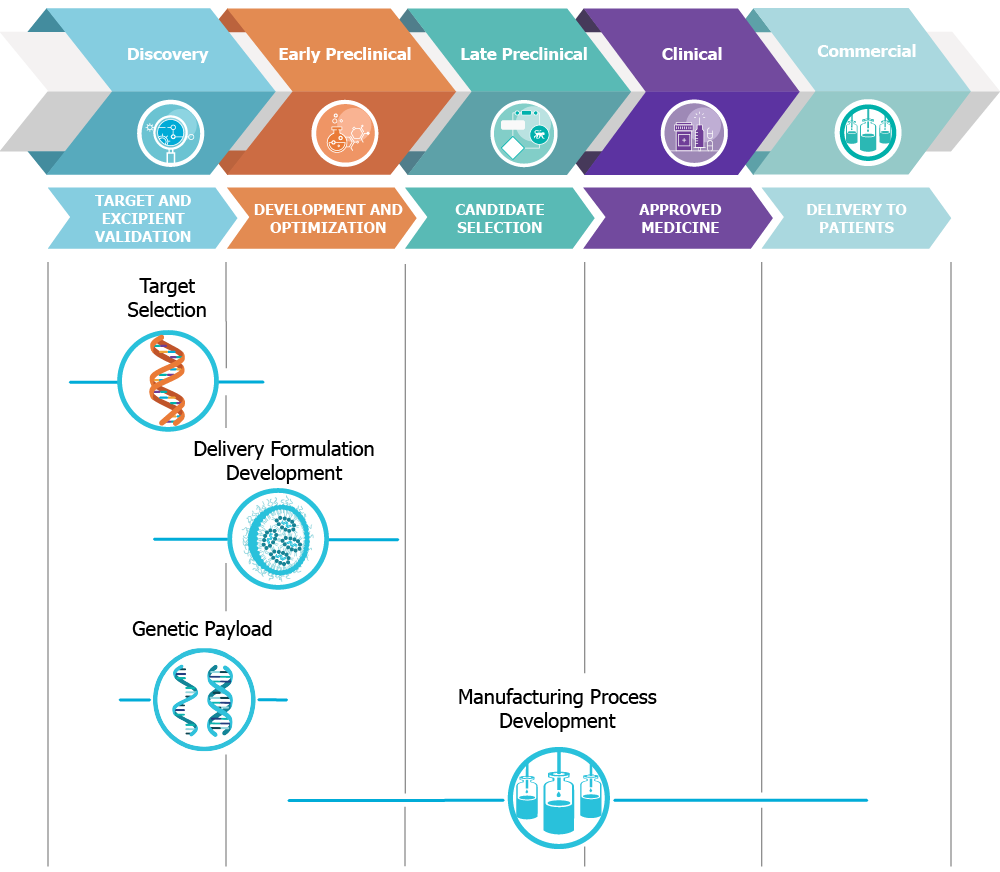 Example specifications for an RNA-LNP used as a reagent to engineer cells to create a Cell Therapy are shown in the table below. 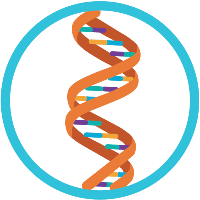 Antigens are typically selected from biomarkers known to be over-expressed in cancer cells. The scFV antigen binding domain of antibodies raised to bind the cancer biomarker are encoded in an mRNA along with a transmembrane domain and stimulatory and co-stimulatory molecules of the endodomain to engineer the CAR.

mRNA provides a convenient platform to mix and match multiple antigen binding domains with multiple stimulatory and co-stimulatory domains to create a library of CARs in silico that can be screened in vitro and in vivo.  Furthermore, the ease of encapsulation into non-viral delivery systems such as lipid nanoparticles (LNPs) provides a rapid approach to screening a large library of different CARs. 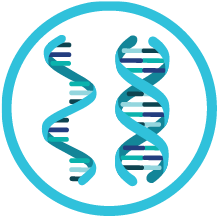 Gene Editing: Tools such as CRISPR/Cas9 represent a breakthrough for cell therapy, promising the ability to remove, add or edit genomic DNA with high specificity.  There remain numerous challenges to delivering CRISPR components such as the Cas9 endonuclease and the single guide RNA to cells. To date, several groups have demonstrated that the Cas9 endonuclease can be encoded in mRNA, and co-encapsulated with one or more guide RNAs into an LNP and delivered to the liver in vivo [1,2]. This approach gives rise to highly durable gene modulation, while the transient nature of the Cas9 mRNA minimizes the risk of off-target edits caused by persistent Cas9 expression. It is conceivable to employ this approach to enable gene editing in other cell types.

3. Delivery and Formulation Technology
Precision NanoSystems has developed a lipid library specifically for gene delivery to a wide range of cells including T Cells. PNI’s lipid nanoparticle (LNP) technology constitutes a synthetic gene delivery tool that does not require the complications of a packaging cell line. This is particularly beneficial for rapidly screening a library of CARs. Additionally, PNI LNPs can be easily adapted to introduce mRNA into a variety of T cell subsets.

Anatomy of an LNP 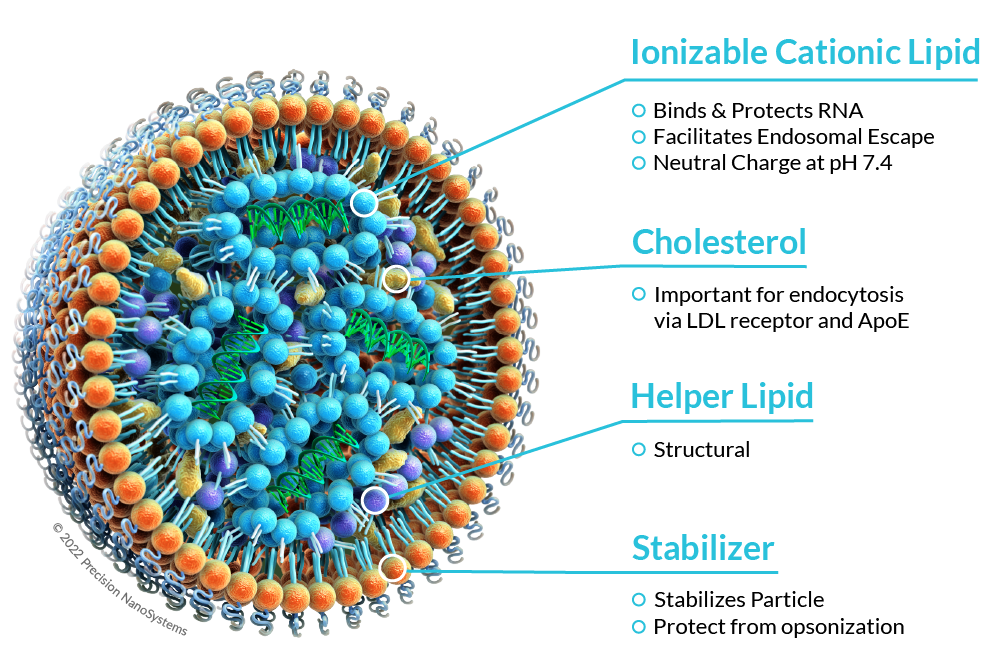 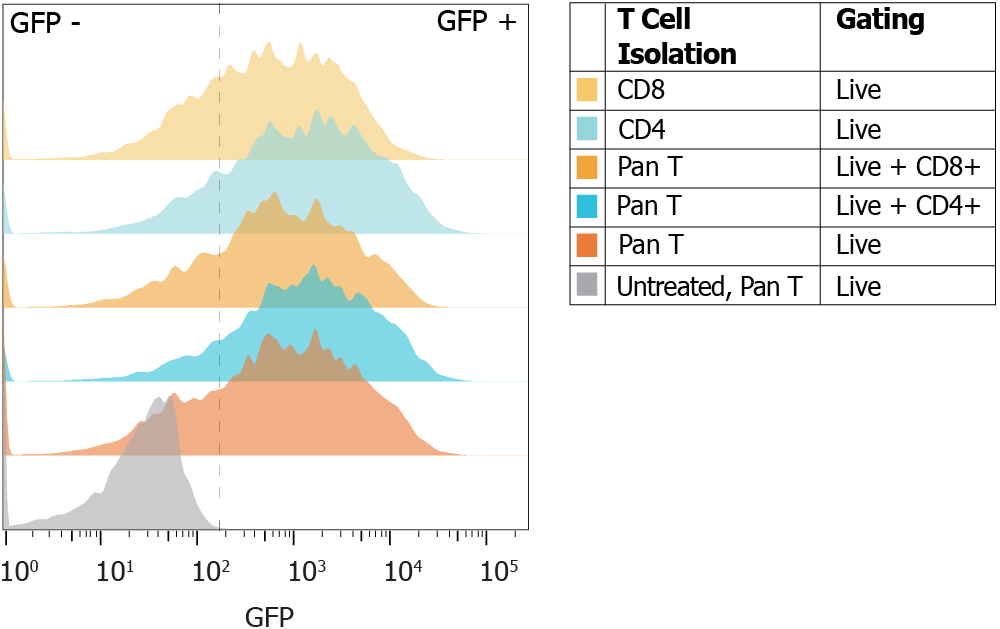 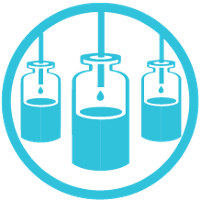 4. Manufacturing
The NanoAssemblr® manufacturing platform enables the rapid production of RNA-LNP on demand. The NanoAssemblr platform comprises four systems (Spark, Ignite, Blaze and GMP) that use the same proprietary NxGen™ microfluidic architecture to scale production from microliters to hundreds of liters. Non-turbulent microfluidic mixing affords exceptional control over the microenvironment of RNA-LNP formation ensuring high quality product. For Cell Therapy applications, the volume of RNA-LNP reagent needed for cell reprogramming will depend on the workflow of the given application. 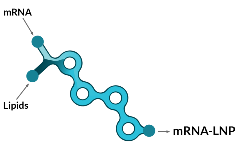 Test batches of up to 20 L/h produced with a single NxGen Mixer while maintaining particle characteristics (size and PDI) and biological activity.

Precision NanoSystems is committed to supporting Cell Therapy development with a full stack of accessible technologies and solutions coupled with drug development expertise to accelerate the design, development and manufacturing of promising gene delivery technologies. 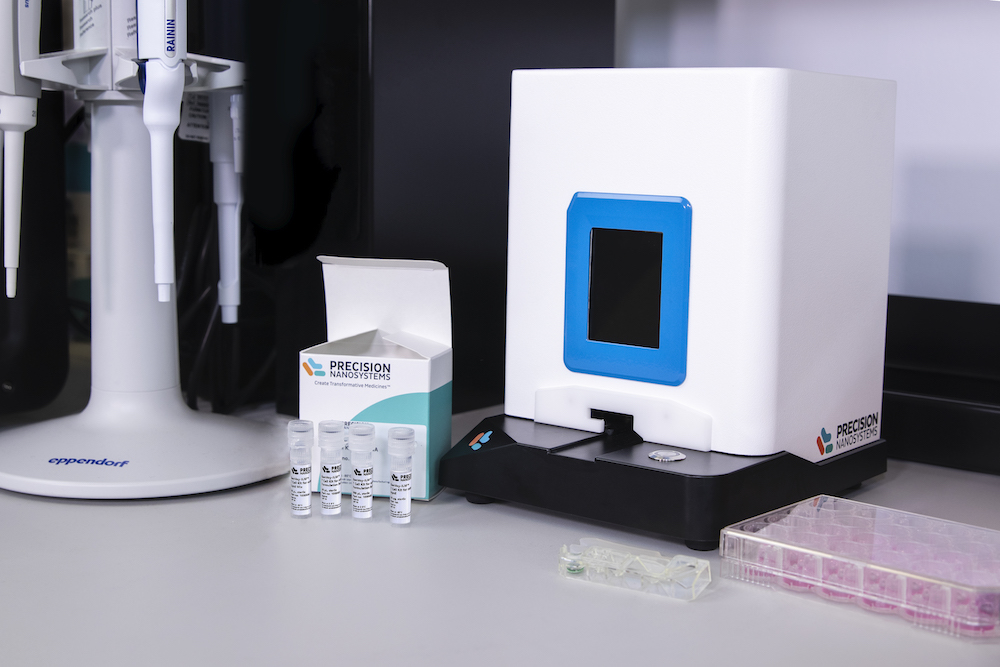 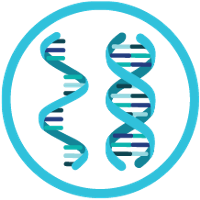