Microfluidics allows fine control over process parameters, enabling optimization of nanoparticle characteristics and nucleic acid encapsulation. This review examines how microfluidics has been used in the formulation, preclinical, and clinical development of gene-delivery nanoparticles.

Driven by the promise of targeted, personalized therapies and access to an otherwise undruggable space, genetic medicines are emerging as the next frontier in drug innovation. Numerous nucleic acid-based therapeutics are in various stages of preclinical and clinical development (1, 2), but the field faces difficulty delivering these therapeutics to their target cells while protecting them from degradation by the nucleases abundant in the body. Nanoparticle gene-delivery systems offer a potential solution, but therapeutic performance depends on the physicochemical characteristics of the nanoparticles. As these characteristics are extremely sensitive to production conditions, maintaining consistent conditions between batches and production scales is a critical challenge.

Microfluidics has emerged as the front runner to overcome this challenge, allowing fine control over the formulation conditions by exploiting the physics of confined fluids to control nanoparticle formation. Unlike conventional nanoparticle production methods, microfluidic reactors operate using continuous processes that maintain consistent production conditions, and multiple reactors can be linked in parallel to increase throughput (see Figure 1). These advantages have led to broad adoption of microfluidic production and had considerable impact on genetic medicine research. Numerous nucleic acidbased therapeutics are in various stages of preclinical and clinical development. 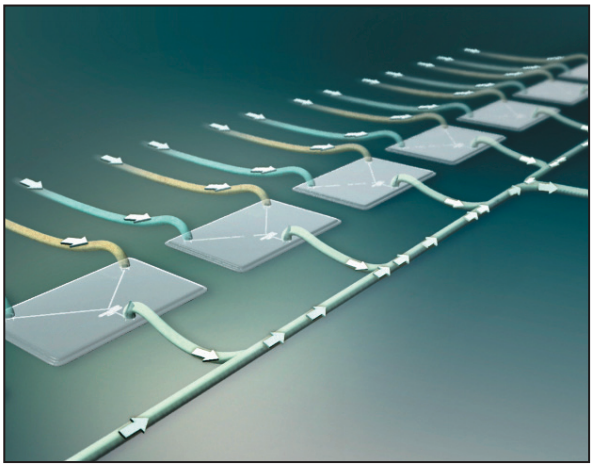 Microfluidic production of genedelivery nanoparticles is closely tied to the development of the nanoparticles themselves (1). Researchers Pieter Cullis and Michael Hope developed pHsensitive ionizable cationic lipids that mediate the encapsulation of nucleic acids into lipid nanoparticles (LNPs) and their uptake and release in cells (1). They concurrently developed new formulation methods, where lipids dissolved in ethanol are mixed with acidic buffer containing short interfering ribonucleic acid (siRNA) (see Figure 2). The resulting siRNALNPs are electrostatically neutral at pH 7, and nucleic acids are completely encapsulated within the interior of the LNP. Early production processes involved injecting the ethanol phase into the aqueous phase, which was later refined by combining streams of the two phases in a T-shaped fitting. Both methods, however, employ turbulent mixing, which is difficult to control and challenging to reproduce precisely.

In contrast, laminar flow in microfluidic channels is reproducible and well controlled. The two fluid streams entering a microfluidic channel appear as separate adjacent streams, despite being miscible, before slowly diffusing together. As rapid m i x i ng i s c r uc ia l to achieving small uniform particles, two microfluidic designs to promote rapid mixing are commonly used in nanomedicine formulation: hydrodynamic flow focusing and chaotic advection. Flow focusing has been used predominantly to formulate polymeric nanoparticles entrapping hydrophobic small molecules (3), although some examples of its use with nucleic acid formulations exist (4, 5). In contrast, chaotic advection has been broadly adopted because of the combination of higher flow rates that can be achieved (two orders of magnitude greater than flow focusing), and the commercial availability of such systems as the NanoAssemblr platform (Precision NanoSystems), which is designed specifically for the development and production of nanomedicines (3, 6–8).

FROM DISCOVERY TO CLINICAL DEVELOPMENT

At the basic research and discovery stage, microfluidics has enabled LNPs to be rapidly formulated in microliter volumes, mak ing RNA-LNPs practical for high-content screening (9). Nanoparticles produced by microfluidics are now frequently used to elucidate molecular mechanisms of disease and validate therapeutic targets by siRNA knockdown. For example, neuronal chloride channel proteins were screened to identify a target for RNA interference treatment for cytotoxic neuronal swelling— the major cause of mortality from traumatic brain injuries (10). It was also used to discover that the only insulin-sensitive glucose transporter present in a popular cellular model of diabetes was historically misidentified, prompting the re-examination of any insights into diabetes derived from this model (11).

Further down the drug development pipeline, microfluidics is enabling researchers to focus on developing new materials and maximizing gene delivery. Microfluidics allows rapid optimization of formulations by tuning the total and relative flow rates of the aqueous and organic phases (see Figure 3). Studies have demonstrated that reproducibility and robust scaling are achievable using this approach. For example, one study equalized particle diameters through microfluidic parameters to properly evaluate the effect of different unsaturated lipids on plasmid DNA expression in human cell lines and chicken embryos (12). In two other examples, novel carrier materials were screened for in-vivo nucleic acid delivery leading to the development of lipocationic polyester nanoparticles (13) and low toxicity biodegradable dendrimers (14) that were both highly effective in treating tumor models in mice. The speed, control, and reproducibility of microfluidics allows rapid development of innovative formulations.

Figure 3. Microfluidic lipid nanoparticle (LNP) formulation. Nucleic acids in buffer (left) and LNP precursors in solvent (right) are injected into the two inlets of a microfluidic cartridge, where they are mixed in a controlled fashion. LNPs of different sizes (far right) can be produced by varying the relative and total flow rates. 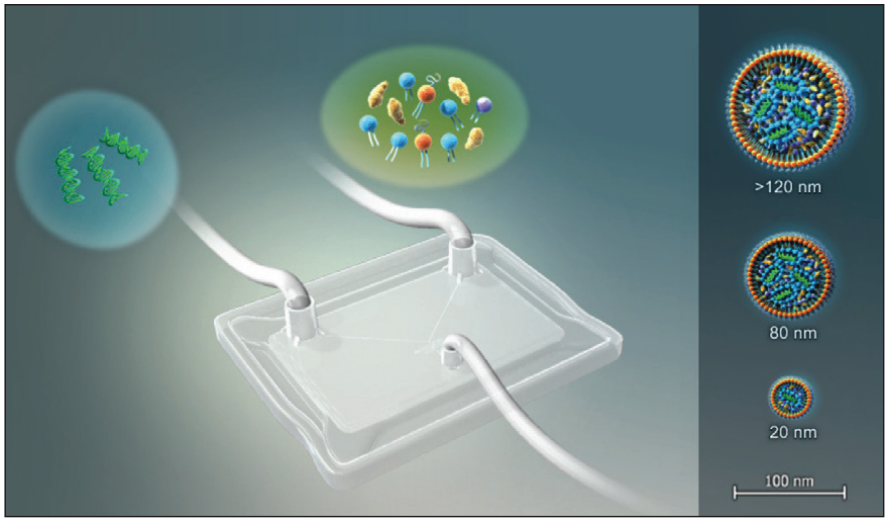 One area where microfluidics has had the biggest impact is the development of therapeutic siRNA-LNPs for numerous diseases, particularly cancer. PCTAIRE1 is a cyclin-dependent kinase pivotal to the proliferation and anti-apoptosis in many cancers, making it an important target for siRNA therapy. PCTAIRE1-PostsiRNA-LNPs, developed using microfluidics, significantly inhibited tumor growth and increased apoptosis in two mouse models bearing xenografts of either human colorectal cancer or melanoma (15).

The speed, control, and reproducibility of microfluidics allows rapid development of innovative formulations.

LNPs can also be used to encapsulate messenger RNA (mRNA) to replace missing or dysfunctional proteins caused by genetic disorders. mRNA is a particularly challenging molecule to work with because of its high susceptibility to degradation, making nanoparticles essential to the successful translation of this therapeutic. Hemophilia B is an example of a genetic disorder where a single dysfunctional protein, factor IX, is the root cause of the disease. The protein is an excellent candidate for mRNA therapy, and LNPs produced by microfluidics have been used to deliver factor IX mRNA and restore activity in a knockout mouse model (16).

Although many mRNAs can be efficiently delivered using LNPs, the length of Cas9 mRNA makes its encapsulation difficult, and it often requires a separate delivery vehicle for the single guide RNA, requiring fine pharmacokinetic coordination for simultaneous delivery (20). This is a problem for CRISPR/Cas9 gene editing, as the transient expression of Cas9 mRNA is a simple way to avoid the off-target genome editing that can potentially be seen with persistent Cas9 expression. Recently, microfluidics has been used to encapsulate both Cas9 mRNA and single guide RNA within the same zwitterionic aminolipid nanoparticles, avoiding the pharmacokinetic complexity of separate delivery and successfully inducing permanent genome editing in mice (20).

LNPs have also been used to selectively target leukocytes by modifying the nanoparticle surface with monoclonal antibodies against specific surface receptors. For example, to target mantle cell lymphoma (MCL)—a B cell malignancy characterized by overexpression of cyclin D1—LNPs encapsulating cyclin D1 siRNA were conjugated with monoclonal anti-CD38 antibodies. This approach allowed the LNPs to bind to the CD38 cell surface protein expressed on most MCLs, and deliver their siRNA payload in a targeted manner, which increased survival in xenograft mouse models of MCL (21).

The ability of mRNALNPs to induce the expression of nearly any protein makes them invaluable in personalized medicine, gene-editing, and immuno-oncology.

The reproducibility, scalability, and versatility of microfluidic technolog y allow rapid development of LNPs and other novel gene delivery vehicles, and have led to its adoption in basic research, target validation, and formulation development of genetic medicines for cancer, heritable disorders, and vaccines. While siRNA delivery was the beachhead application, the clear trend is towards mRNA therapies. The ability of mRNALNPs to induce the expression of nearly any protein makes them invaluable in personalized medicine, gene-editing, and immunooncology. There is an intense need for effective mRNA delivery technologies, and the speed and scalability of microfluidics have driven rapid developments in the field. Microfluidics has become an integral part of genetic medicine development and has significantly contributed to advancements in the field from bench to bedside.


To view this article and many others, visit BioPharm International's The Science & Business of Biopharmaceuticals September 2017 Issue.


limit search to this category

Nanoparticle encapsulation is gaining momentum as an effective drug delivery system, but traditional manufacturing methods are labor intensive, hard to reproduce, and difficult to scale up. Precision NanoSystems Inc. has developed a proprietary tec...